TMS 2023 Annual Meeting & Exhibition is a well-known international conference in the field of materials science. The conference is scheduled to be held in March 2023. ESR 4 has already submitted his abstract and got accepted. The topic of his presentation would be ‘Fatigue evaluation of additively manufactured 316L stainless steel’ in the ‘Fatigue in Materials: Fundamentals, Multiscale Characterizations and Computational Modeling’ session. ESR 4 will present a systematic approach to understanding the fatigue behaviour of laser powder bed fusion processed 316L stainless steel.

InDEStruct was also present at the Internoise 2022 conference in Glasgow, which took place from 21st to 24th of August. 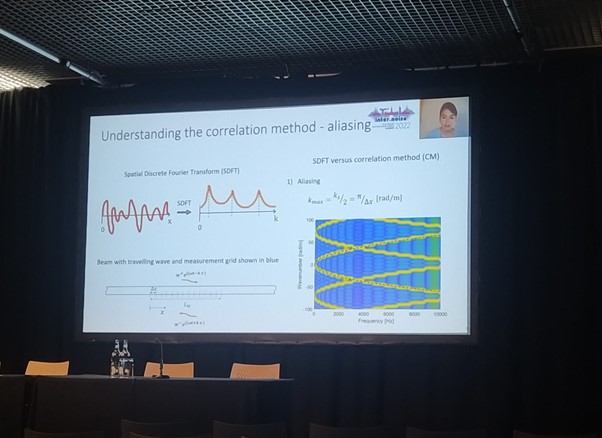 Presentation from Milena (ESR 3) at Internoise 2022 conference, in Glasgow

The 51st International Congress and Exposition on Noise Control Engineering is a major international conference on noise control engineering and attracts scientists, engineers and consultants from around the world.

Milena (ESR 3) presented her work on the “Estimation of flexural wavenumbers in the presence of multiple wave components” in the session of Advanced Measurement Methods. It is a numerical investigation that evidences the limits of the correlation-based method in estimating multiple wavenumber components that are closely spaced.

ASMO-UK conferences (12th) and the first in the new series ASMO-Europe, is a conference on Engineering Design and Optimization, held in Leeds, UK on 18th and 19th of July 2022, with ESR1 in attendance.

The conference was host to researchers specializing on topics of optimization, such as, combinatorial optimization, inverse problems, meta modelling, sensitivity analysis, topology optimization, and other industrial experts on applications of optimzation. The participants hailed from various research institutes and companies such as Fraunhoffer, Cenaero, Volkswagen, Airbus and Rolls-Royce to name a few.

Among them, ESR1 also got a chance to present his work on “A method to reduce experimental costs using multi-fidelity Gaussian processes for corrugated tubes”. 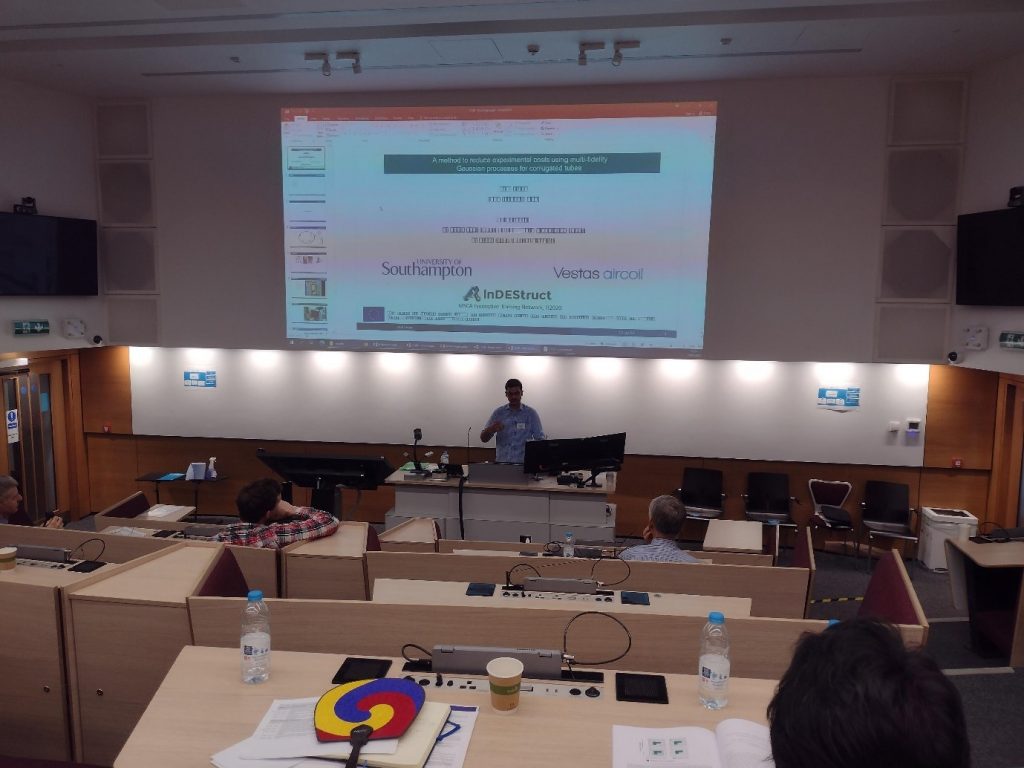 Engineering practices rely heavily on experimentations, which means there is also significant budgeting of resources required to conduct them successfully. Furthermore, experimenting of just one equipment or a single configuration of a component or a system is almost never enough, as more data needs to be acquired before some important business (or design/strategic) decision can be taken. This in itself raises another set of questions such as, which configuration(s) should then be tested and/or how many data points would suffice for each of those configuration(s), keeping in mind, the strict budget of resources at hand. This, consequently, adds up to the the costs involved with a signigficant risk of overrun which is why, it is almost impossible to conduct experimentation with such approaches, and new approaches are necessary. 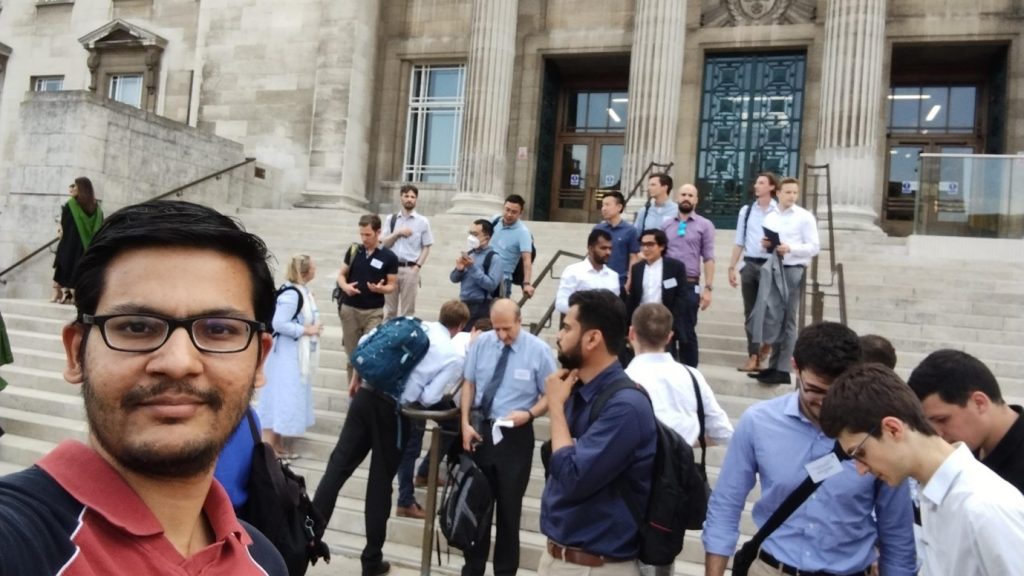 After group photo of ASMO 2022 participants, at the key monument of University of Leeds.

This is where ESR1’s work comes into the picture, which aims to find answers to this question of, can experimental effort be reduced? Essentially, his work addresses this question by combining data by conducting a larger number of simulations, which are relatively cheaper to conduct, along with very few experimentations, which are expensive. The data gathered and utilized in this way provides predictive capabilities for quantities of interests within an acceptable range of error.

As ESR1’s project was based on a heat exchanger application, it also proved to be a welcoming change amongst most of the other applications that were discussed during thier presentation. They were either airfoil, or topology optimization applications. So a question such as, “Can I apply this method to my application?” was very common, as observed by ESR1.

In general the conference was a huge success, as most of the participants, apart from the two-day long presentations, also engaged in discussions on contemporary challenges on optimization faced by the industry as well as academia.

The event also proved a great place for networking as most of the participants were students and experts in the field of optimization, which is also the topic of research for ESR1.

Truly a learning experience for ESR1!

The 8th European Congress on Computational Methods in Applied Sciences and Engineering (or ECCOMAS Congress 2022) is a scientific organization grouping together European associations with interests in the development and applications of computational methods in science and technology. This conference was held in Oslo, Norway from 5th to 9th June 2022, with ESR1 (Atul Singh) in attendance. 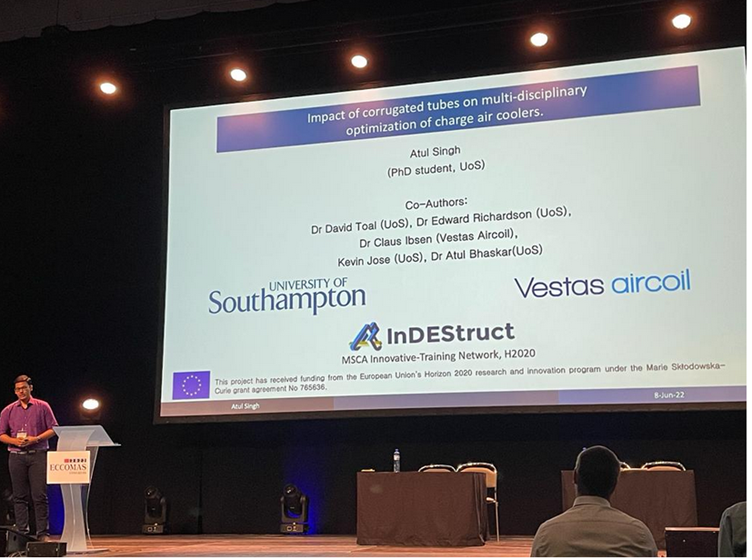 In this event, among the various presentation on myriad of engineering topics given by researchers across the world, ranging from computational solid and fluid mechanics, natural sciences, applied mathematics, right to machine learning etc, ESR1 also got an opportunity to present his work in minisymposium titled “Emerging methods for large-scale and robust multidisciplinary optimization (MDO) for industrial applications-II. The title of ESR1’s talk was on “Impact of corrugated tubes on multi-disciplinary optimization of charge air coolers”. 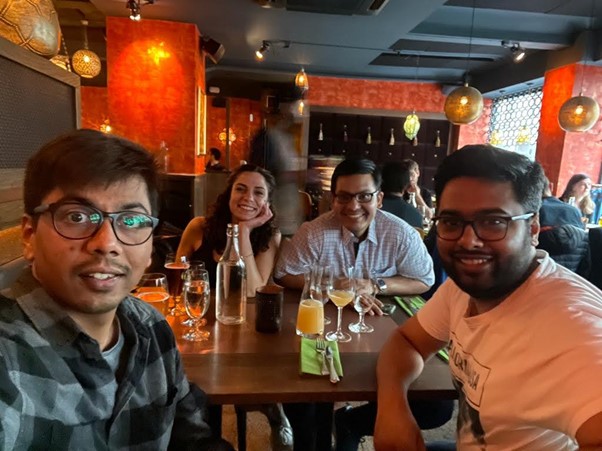 His work on aero-thermal optimization of coolers is in collaboration with ESR2, Kevin Jose, whose research deals with characterizing the frequency and vibration response of the cooler designs. The results disseminated within this conference were a product of this multi-disciplinary collaboration between Atul (ESR1) and Kevin (ESR2). 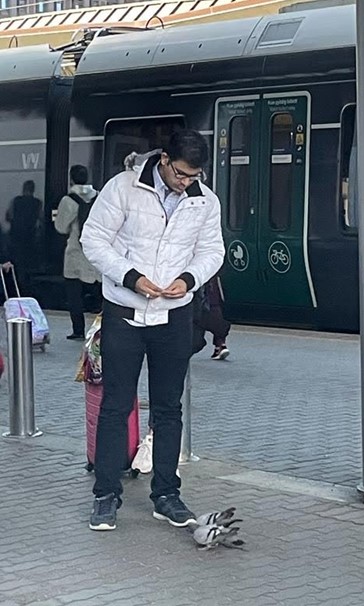 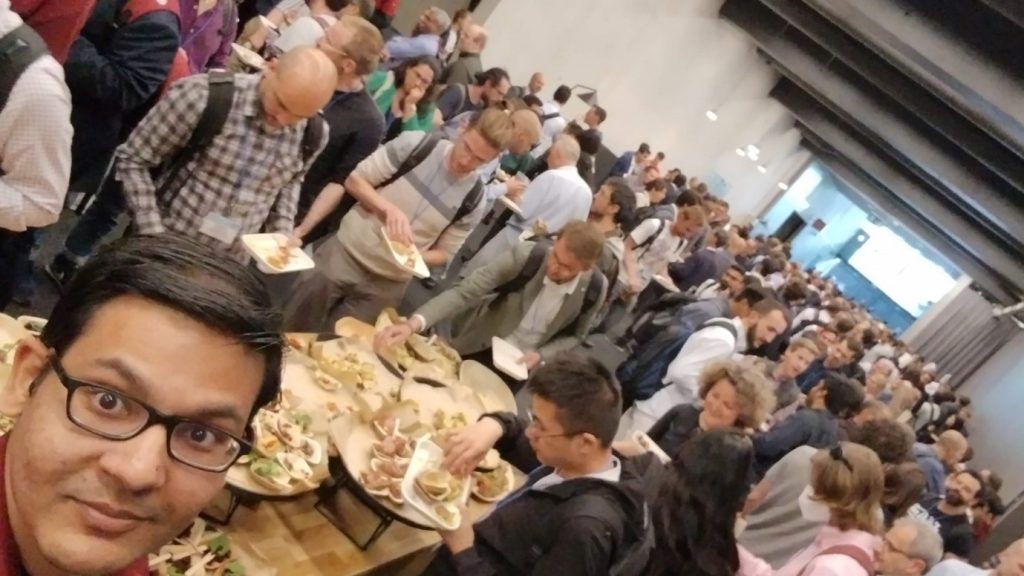 Atul (ESR1) snacking with fellow researchers from across the world on the eve of conference, and discussing “resource“ allocation, in the face of a fierce supply-demand problem. 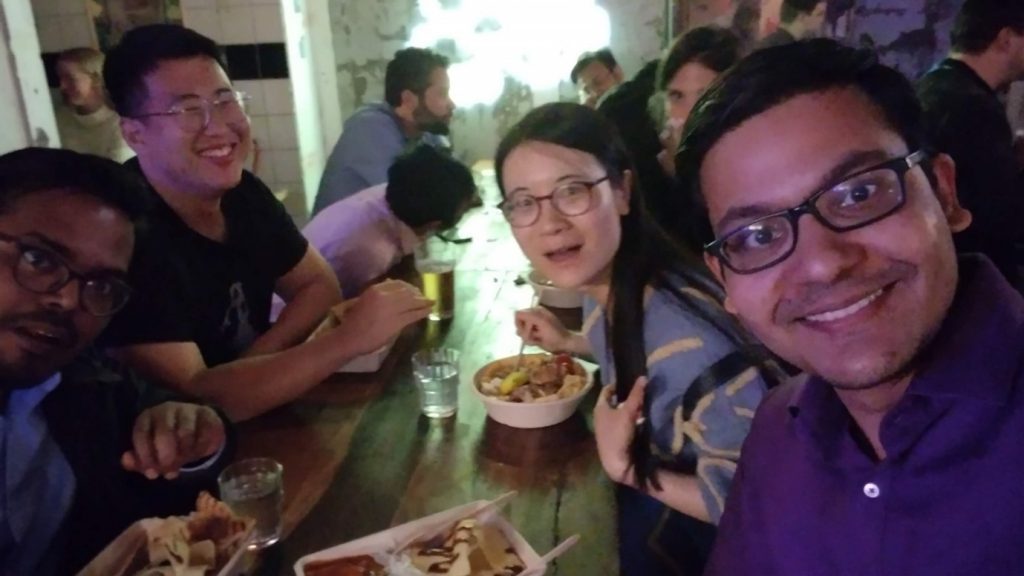 From Atul’s visit to Gustav Vigeland’s Sculpture park. Inspired from the moods in the life of an individual. With the pillar interpreted as a kind of vision of resurrection, and our longing and striving for spirituality. 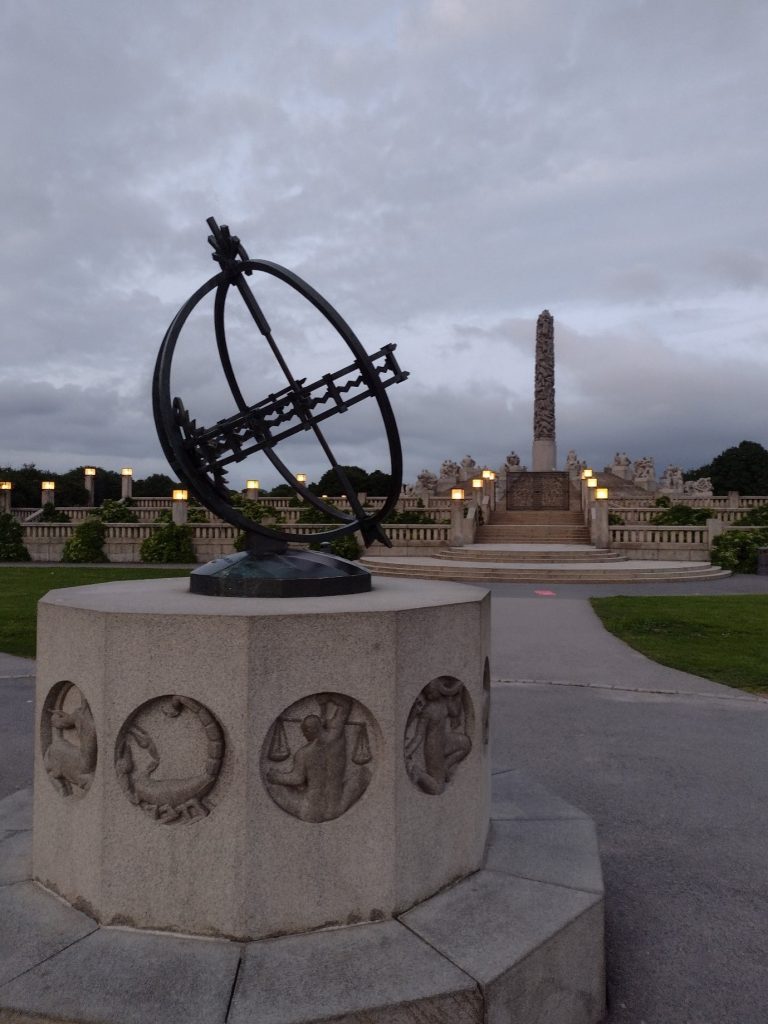 This sculpture placed after a sculpture called “Circle of life”. (Get it?).

The 10th international Conference on Wave Mechanics (WMVC 2022) was held in Lisbon, Portugal from 4th to 6th July 2022. The conference was held with the aim to have a significant impact on the development of contemporary analytical, numerical, and experimental methods in wave mechanics and vibration technology and create an opportunity for opening a forum for discussion and collaboration amongst the participants, hailing from variety of disciplines.
Milena (ESR3) presented her work on the simulation and experimental estimation of the free wavenumbers for helically grooved tubes. It mixed numerical and experimental approached to bring to light an interesting dynamic behaviour of helically grooved tubes, which were of initial interest of and provided by Vestas aircoil. The conference paper can be found here.
Additionally, given the multidisciplinary approach of InDEStruct, which integrated the different areas of optimization and material science with the topic of vibrations, this conference proved to be a perfect stage for dissemination of the InDEStruct project, to people from both academia as well as industry. Thus, the WMVC 2022 also hosted an InDEStruct Mini symposium, which contained presentations from all ESRs and the coordinator of the project.
It started with an introduction by Prof Atul Bhaskar (former InDEStruct Project and ESR training manager), which highlighted the main goals of the project, followed by the presentations of the ESRs. 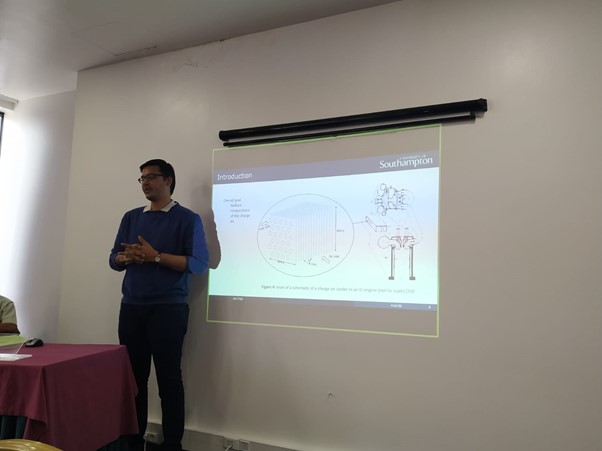 Atul Singh (ESR1) presenting approaches for optimization in the context of a whole engine.

Kevin and Milena (ESRs 2 and 3) talked about “Modal analysis of heat exchangers: experimental, analytical and numerical approaches”, showing results of their dynamic modelling and experimental validation of heat exchangers. Talha (ESR4) presented on the topic of “Vibration induced fatigue failure due to sequential and multiaxial loading condition”, introducing several approaches to estimating vibration induced fatigue on industrial components. Atul Singh (ESR1) then presented his work on the “Impact of corrugated tubes on multi-disciplinary optimization of charge air coolers”, which concluded with an exhaustive question answer session and discussions from the people in audience about the frequency response of the charge air cooler, and the various approaches to optimize the same. 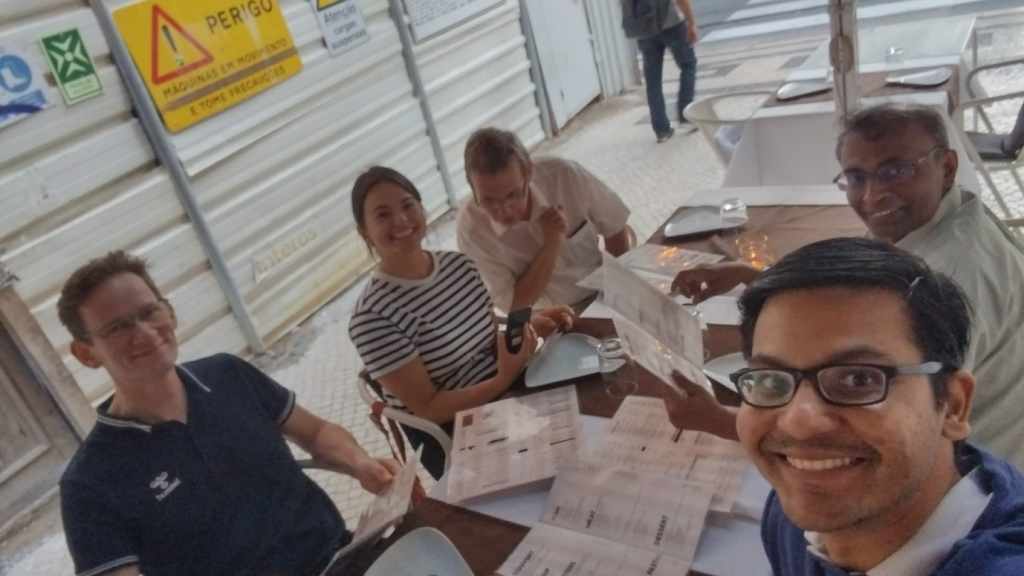 Time to optimize the evening with maximizing the fun parameter with help of some Portuguese delicacies.

This session concluded with a presentation by Dr Claus Ibsen (InDEStruct Project Coordinator) highlighting benefits of the project to Vestas aircoil followed by a question that led to the discussion panel regarding the acceleration of product development in the industry aided by academic research projects. It also counted with the presence of Dr Neil Ferguson (Current Project/ESR training manager) acting as chairman for the discussion panel.
Moreover, as part of the conference experience, a lot of valuable networking and some city-exploring also took place. 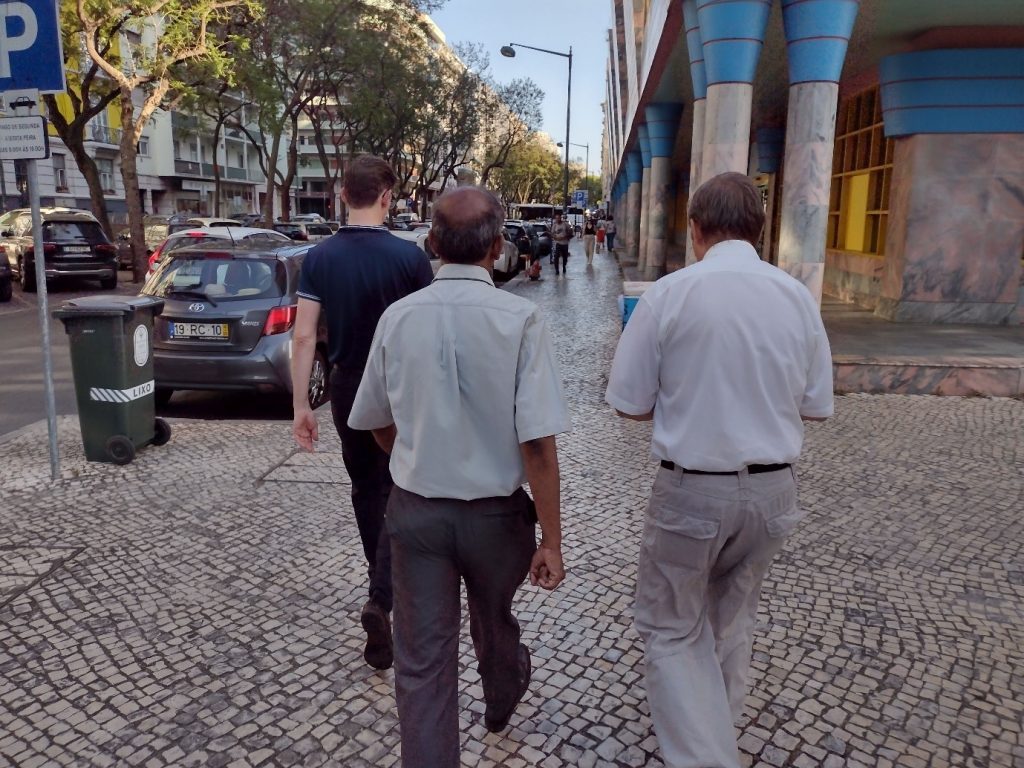 Prof. Bhaskar and Kevin (ESR2) attended the 11th European Solid Mechanics Conference in Galway, Ireland in July 2022. Kevin gave a talk titled “Chladni-like patterns in pillared plates”. ESMC is one of the largest solid mechanics conferences in Europe and provided a great avenue for research dissemination and networking. 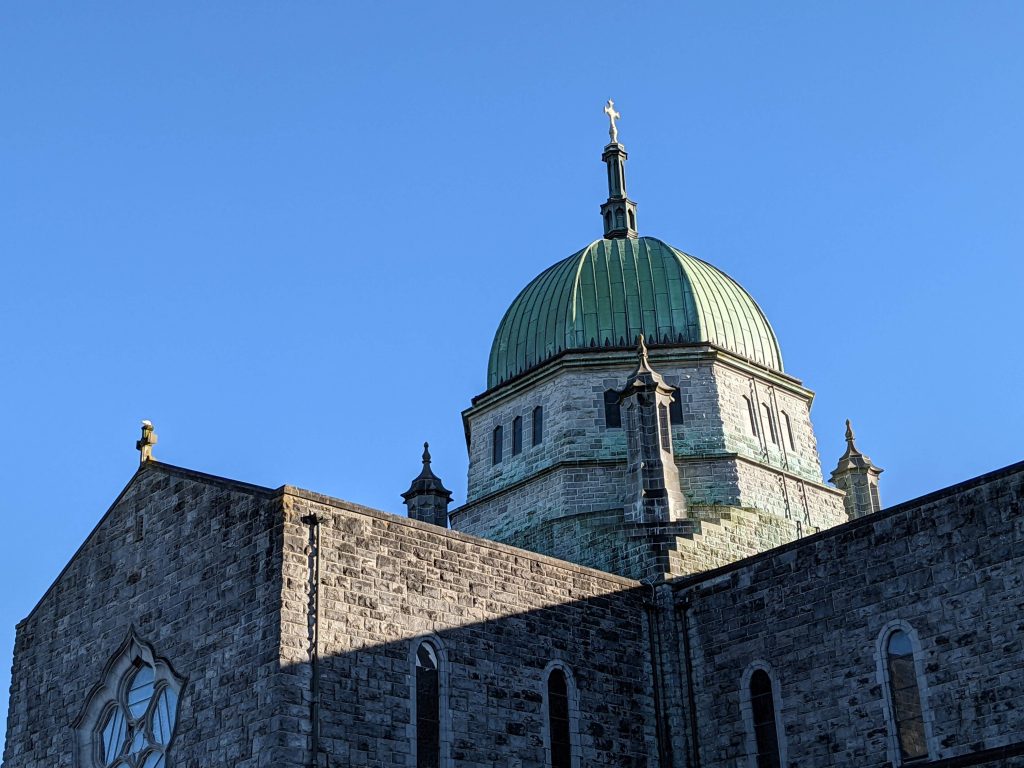 Kevin (ESR2) attended the 18th European Mechanics of Materials Conference at the University of Oxford, UK in April 2022. He gave a talk titled “Analysis and computations for metamaterial with negative apparent coefficient of thermal expansion”. The conference provided a great opportunity for disseminating the results of InDEStruct and networking for the ESR. 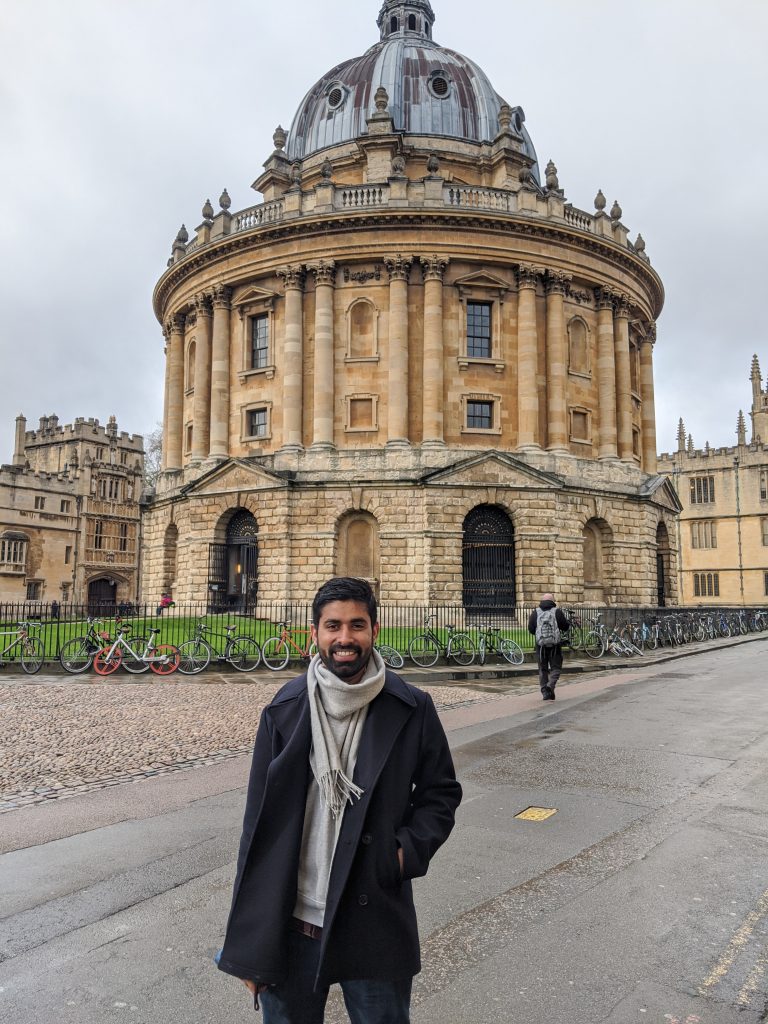 The InDEStruct project was covered recently in the Project Repository Jounral – Volume 14. Read the four-page article to find out more about our research! 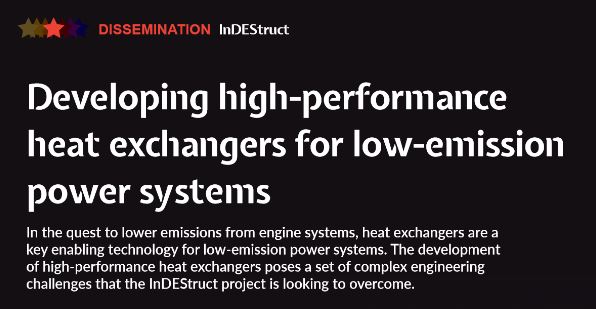 The ESRs participated in Southampton Science and Engineering Festival where they introduced the public to the amazing technology of 3D printing with a little help from… SUPERHEROES! 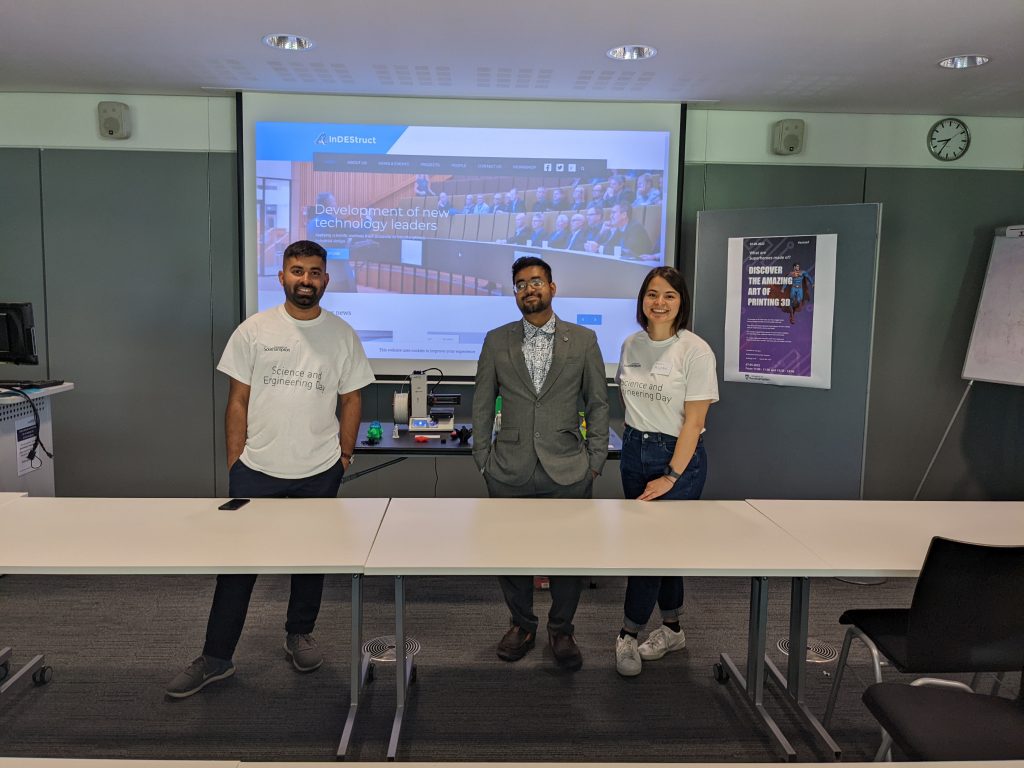 The ESRs took part in a day-long innovation workshop with colleagues from Vestas aircoil in Odense, Denamrk. The workshop was led by Susanne Odgaard from Futureworks Cph. 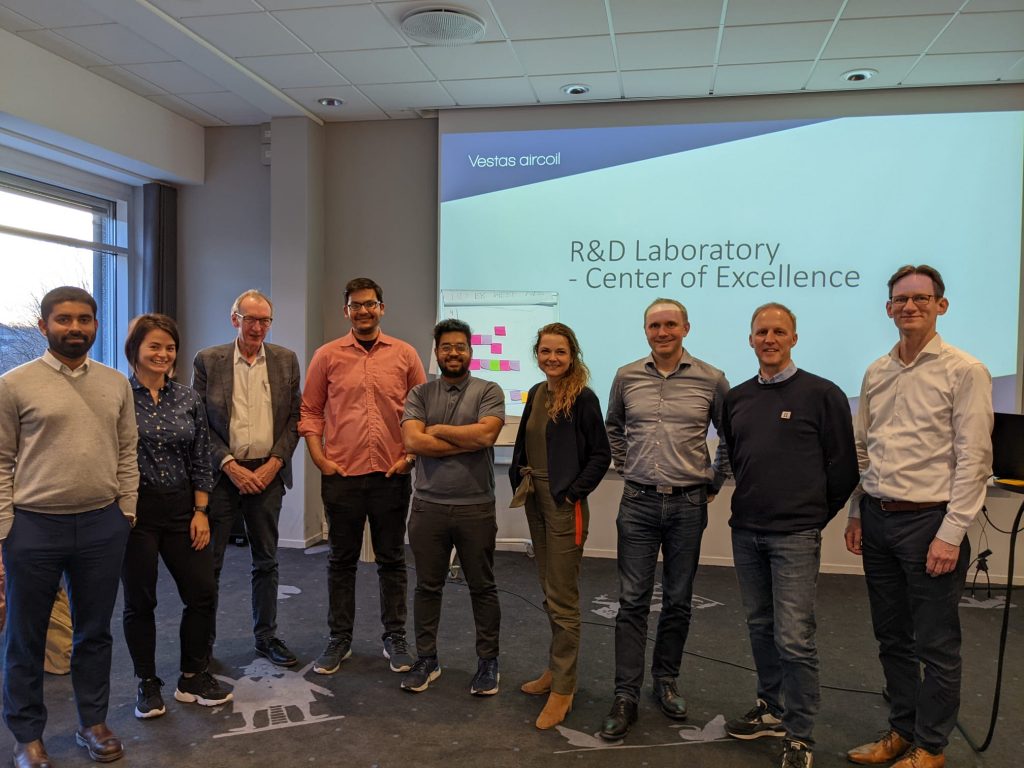 The ESRs learned crucial lessons in structuring their ideation process and collaborating with industrial partners.

This website uses cookies to improve your experience while you navigate through the website. Out of these cookies, the cookies that are categorized as necessary are stored on your browser as they are essential for the working of basic functionalities of the website. We also use third-party cookies that help us analyze and understand how you use this website. These cookies will be stored in your browser only with your consent. You also have the option to opt-out of these cookies. But opting out of some of these cookies may have an effect on your browsing experience.
Necessary Always Enabled
Necessary cookies are absolutely essential for the website to function properly. This category only includes cookies that ensures basic functionalities and security features of the website. These cookies do not store any personal information.
Non-necessary
Cookies that may not be particularly necessary for the website to function and is used to collect data via Google Analytics use for statistic reasons, can be enabled if your okay with it.
SAVE & ACCEPT